On Saturday, June 29th, Antonio Medina Parra died at Duke Hospital. He was 63 years old—just two weeks shy of his 64th birthday. More than half a century earlier, Antonio had crossed the border from his birthplace in Mexico and begun picking in America’s fields. He worked his way up the West Coast, living in camps and working six days a week until he met Caesar Chavez in the fields outside Fresno and heard that workers were going to strike. Antonio was dubious about the prospects for organized labor. He jumped in a car and headed east to find work wherever he could.

Eventually, Antonio followed a woman he’d fallen in love with to North Carolina, where he married, had a daughter, and continued to live by the work of his hands. When Antonio came to Durham, no one here knew what a tortilla was. Life was not easy. His first wife died in childbirth. He struggled with alcoholism and had run-ins with the law. Even when he had the option of living inside, Antonio chose for years to live in homeless camps with other workers. Somehow he felt free there, in the open air. And somehow he kept going.

Nearly a decade ago, when Antonio didn’t recover from what seemed like a normal cold, he ended up in Duke Hospital and learned he had cancer. The doctors removed a lung and declared him in remission. But day labor was no longer possible, and disability wasn’t an option for an undocumented man who’d lived more than 40 years in the United States. Antonio joined us not because he was eager to live in community, but because he had nowhere else to go.

But he brought with him a deep Catholic faith and lots of experience sharing life with others. Antonio had a good sense of humor, a determination to press on whatever the odds, and a seemingly endless reserve of stories to tell at the dinner table.

A couple of years ago, after his birthday party at a local Mexican restaurant, Antonio had an acute lung crisis. An ambulance rushed him to the hospital, where he nearly died. He spent three weeks recovering in the ICU. Visiting him one afternoon, I walked in as he was watching the meditation channel on the hospital’s TV. He invited me to join him, and pointed excitedly at the TV whenever there was a new sentence of guidance from the calm voice that spoke over soothing music. After six decades of attending Mass whenever he could, Antonio discovered in a hospital bed that he was a contemplative.

Or rather, he came to realize that others were contemplatives too. I never heard him say it just like this, but I gathered that sometime during his difficult and lonely childhood, Antonio had encountered the hidden strength at the center of himself. Maybe as a younger man he’d confused that strength with his own resolve or even libido (by his count, he’d had six partners in his life, though he couldn’t remember all of their names at the end). But when Antonio’s body could no longer muscle out a way to survive, he learned that Something at the center of his self was still there. In the stillness, he heard a reassuring voice. Even when he didn’t have the power to change his circumstances, God would take care of him. 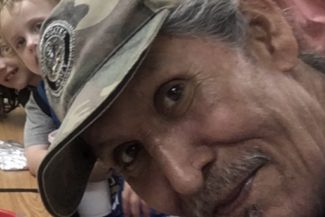 Antonio expressed his faith simply: “I’ll be alright,” he’d say. As Antonio’s lungs failed, we wanted to make plans for when he should go to the hospital. We wanted him to be able tell us when our at-home care systems were no longer keeping him comfortable. “I’ll be alright,” he’d say with a smile. He knew he was dying. But he’d faced death his whole life. Antonio was showing us what it looks like to trust the flame that burns on the altar at the center of each soul created in God’s image.

I’m glad to have walked with Antonio at the end of his life, and I’m glad to be part of Common Change that stepped in and helped us pay for his funeral. Jesus said, “I was a stranger and you welcomed me.” Once, Antonio was a stranger. Now, he’s family in God’s eternal home.