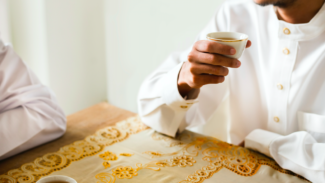 Do you ever read the news or scan your social media feeds or even just step outside and feel the weight of all that seems to be going wrong in the world? You know in your heart that not all is lost, and for all the negativity and despair that seems to grow louder every day, there’ve got to be people out there who remind you of what’s good and true. Common Change is one place where you can connect with others to make a positive, tangible difference in the lives of people all around the world.

Behind the headlines of conflict in the Middle East are real people trying to get through each day with their real lives. They want to work to pay their bills to feed their families and see their kids off to school. The geopolitical realities present unique challenges, but at the end of the day, they’re just like you and me. However, those daily, often mundane, realities can feel so far away from us and our desire to make a difference. What if I told you that even if you were connected to one person who was connected to someone in need, you could be a big part of that person’s redemption story? My friend Shaun met Hassan when he studied abroad during college. Somehow, thanks to the strength of long-distance loyalty and pre-whats app calling cards, they have stayed in touch all these years. Hassan could tell the friendship was genuine from the first time he met Shaun. Not too long ago, in one of their conversations, Hassan seemed discouraged, and Shaun knew things were not going well. It was not like Hassan to dwell on his challenges, but because he trusted Shaun, he shared with him some of what was going on. He had been laid off, and his family was living on his wife’s nursing salary. Two of his four kids were in university and were at risk of not being able to pay school fees. The fact that Hassan had to sneak across the border into Israel every day to increase his chances of finding employment only added to the drama of the situation. Shaun wanted to honor his friend’s dignity, but also knew that he needed some help. Shaun tapped into the shared resources of his Common Change group, and the funds to meet Hassan’s needs were approved in just a few days.

After the money reached Hassan, he called Shaun to share his gratitude. “Shaun,” Hassan started, while holding back tears, “I’m just amazed at this gift. I have been thanking God that there are still good people in the world who would take care of others no matter where they are from.” Shaun was also nearly in tears at this point as his heart swelled to know that the love he felt for his friend could be demonstrated by the generosity of those who might never meet Hassan. Indeed the world is not so big after all and is full of people who want to do good.