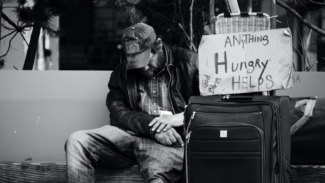 Whenever I see someone standing at the corner with a sign asking for help, the first thing I want to ask is “What’s your story and how did you get here?” I know they are more than what this moment tells me, defined not just by what they seem to lack. Inevitably the light turns green, and I drive away, and I’m left to wonder until the next distraction occupies my mind. Their sign may say they want some change or food or a cigarette, but I can only imagine how powerful it might be if they were given a chance to identify their own needs and desires at that moment. That happened recently in a parking lot in North Dakota. Billy was coming out from the grocery store, and he noticed a woman in distress in her car. He didn’t have any grand plans or heroic intentions that day, but he made himself available and open to whatever might come next. He learned this woman’s name was Stacey, and her family had become far-flung because of trouble finding jobs and now she was on the verge of eviction. Without knowing how things would turn out, Billy started by offering to buy her a cup of coffee.

That small gesture opened the door to trust and a willingness on both sides to face the bigger challenges together. Stacey opened up about her marriage and her family, the joys and challenges. Billy opened up about his life as well. The real turning point came with a powerful question from Billy. “Stacey,” he said, “if you could do anything right now to improve this situation, what would you do?” See Billy knew something that Stacey didn’t. Billy knew that he was connected to a group of people who had been steadily pooling their resources for such an opportunity as this, unbeknownst to any of them that that particular moment would happen right there in that North Dakota strip mall.

They were tapping into a bigger story, and while Stacey sure didn’t consider herself lucky when the day began, she would soon find out that she was in the right place at just the right time. Billy resisted prescribing to Stacey what she needed. He avoided making his generosity the center of the conversation by asking her what she really wanted. He acknowledged and affirmed that although she was “in need,” she also possessed the dignity to make whatever decisions would be best for her family. Billy wouldn’t have been able to do this if he was operating as an individual at that moment. Because he knew there were resources behind him that he alone could not have produced, he knew that there was collective strength and courage to help Stacey face her challenges.