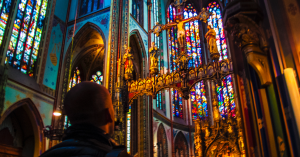 Written by Dustin Hite, reflecting on collaborative giving from his vantage point of being a pastor of a large congregation in Indiana.

If you want real evidence that we read scripture with thoroughly Western eyes, then you should examine one small word, “you.”  Throughout the New Testament, many of us come across this one little word and we read it as a personal address, a note meant just for us.  However, ask any Greek professor and they will tell you what so many of us often overlook–in the original Greek, the word that is translated as “you” is usually plural.  When we read it in any other way than this, we impoverish its meaning, for scripture, if it is nothing else, is the story of community formation, of the gathering of people around a common belief, cause, Savior.

This struggle to read with our eyes clearly affixed to community is no clearer than when we look to the economic issues and struggles of those around us.  In challenging us that “whoever has two tunics is to share with him who has none, and whoever has food is to do likewise” (Luke 3:11), the gospel writer betrays a common truth–to share out of our abundance presumes a relationship.  This challenge emerges from a worldview that understood the bond of community is more important than individual flourishing.  In this context, to have one among you who was in need served as an indictment on the entire community and threatened is social/relational stability.  Giving was not just a means to address economic deficit, but, more importantly, relational deficits.

There exists, today, a very big challenge when it comes to relational redistribution.  That challenge is our ever-present belief that there are much better uses of our resources than giving them to our neighbor.  Yet, if we give in to this line of thinking, then we give short shrift to how our giving can be a means for relationship–in fact, it might be the paramount reason to give.  However, we fail to see this so often because we’re locked up in our thinking, held captive by our Westernized (READ:  capitalistic) thinking that can only see poverty, lack of resources, and struggles as problems to be solved rather than avenues for connection.

It seems odd to state it like this, but after thirteen plus years in ministry, I have come to believe that economics is deeply spiritual.  Whether it is the strain on the collective life of a family struggling under the weight of consumer debt or the single mom fighting to keep a roof over her kids’ heads, economics are both a physical and a spiritual concern.  And yet, it is also a relational issue, as it rises and falls, in many cases, in direct correlation to the depth and breadth of relationships.  Too often, though, our “solutions” to the financial challenges of those among us is all too economic.

Having spent many years considering alternatives, I think there is no other option than one that begins and ends in relationships.  In the Church, we have tried to address these struggles–both for those within our communities and those without–as if the only issue was a dearth of currency.  Then, we wonder why nothing ever changes…

My hope and prayer–as a pastor, a Christian, a human being–is that both individual Christians and their communities of faith will not be held hostage to the kind of thinking that perverts the biblical message.  But, that we will believe, with all our heart, that the opportunity to give what we have decided in our hearts to give (2 Corinthians 9:7) is not just a call to economic redistribution, but relational reconnection too.