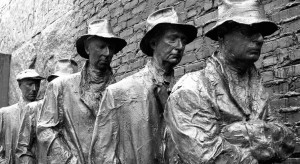 When I first moved to the States two decades ago, I volunteered at a program called ‘Second Helpings’, a community meal served on Saturdays at a large downtown church in Lubbock, Texas. At first I learned who the regulars were by their faces. In time, I learned their names. One Saturday I decided to change sides of the serving line, just to see what it was like. I shuffled along slowly with everyone else, and held out a plate for the servers to fill with reheated brisket from a local bar-b-q joint, and canned veggies from the USDA. Then I sat down and rubbed elbows with my new dining companions. Thus began my six year education in the complexity of poverty, one lunch conversation at a time.

People made their way to Second Helpings for all kinds of reasons. After expanding to serve three days a week, some people came just for the company. Some came because they were hungry. Others came to take food home to family or neighbors who weren’t mobile. The crowd was always bigger at the end of the month. I listened to all kinds of stories and gradually learned to ask better questions. Most days I witnessed evidence of two significant factors in the complexity of poverty: mental illness and addiction.

At the time, I was working with college students at a major public university who were wrestling with their own addictions, and I saw quite a contrast between the folk I ate lunch with in the campus Dining Commons and those I ate with at Second Helpings. ‘Partying’ seemed to be an accepted/expected part of the college experience, and behavior that earned jail time and a felony record for some of the Second Helpings crowd (both of which obviously affect a person’s employability), often only earned students a stiff lecture and the invitation to call someone to take them home. For those students willing to face the seriousness of their addiction, there was all kinds of support and resources available on campus, and – at least in the early ‘90s – health insurance that covered some kind of treatment program. The resources for those at Second Helpings were few and vastly over-subscribed. The truth is, it is much easier to be a functional alcoholic if you’re not poor, and to get the help you need when you’re ready. The same is true for mental illness.

In my third year, I began overseeing Second Helpings, and whenever a volunteer server pointed a guest out and asked me, “Why can’t that guy get a job?” I would invite them to take off their apron, grab a plate, sit down with him and ask him to tell them his story, hopefully beginning their own education in the complexity of poverty. 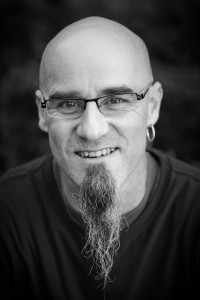 About Sean
Sean Gladding and his family make their home in downtown Lexington, Kentucky. When he isn’t providing part-time office support for a downtown church, Sean is either writing, gardening, caring for chickens, coaching soccer, mentoring students or trying to be a good neighbour. Sean has a B.G.S. with an emphasis in addiction studies, and completed an MDiv. at Asbury Theological Seminary. He is the author of The Story of God, the Story of Us (IVP, 2010) and TEN: Words of Life for an Addicted, Compulsive, Cynical, Divided and Worn-out Culture (IVP, 2014). He is married to Rebecca, and they have an almost 11-year-old daughter, Maggie and a 9-year-old son, Seth.